Whether you love them or hate them, the homes of “The Real Housewives” are something to behold.

Some have their own names (like Villa Rosa, the very pink mansion that belongs to Beverly Hills’ Lisa Vanderpump). Others have their own storylines: Will New York City’s Sonja Morgan ever sell her iconic Manhattan townhouse? They’ve been the subject of unforgettable drag-down feuds (like when Atlanta’s Kenya Moore wanted to prove Moore Manor was better than Sheree Whitfield’s Chateau Sheree). Some even have their own fan base.

But choosing the best and most luxurious homes over the sprawling, multiple-location,16-year run (so far!) of “The Real Housewives” reality TV franchise is no easy feat. Location, of course, is key.

As New York housewife Tinsley Mortimer famously pointed out, there’s a “huge difference” between West Palm Beach and Palm Beach in Florida—and the bigger the better.

The TV-obsessed Realtor.com® data team perused cast members’ homes across the country—from Atlanta to Orange County—to find the most impressive abodes in a number of different categories.

The luxe lifestyles and the homes of these women are among the reasons the shows have become so popular. Besides the high drama, part of the shows’ appeal is the aspirational aspect of it, says Robert Thompson, director of the Bleier Center for Television and Popular Culture at Syracuse University. (Also appealing, a generous sprinkling of schadenfreude.)

“We like to watch and look at these big places and fantasize about having a house like them,” Thompson says. “But sometimes we also like to mock them and feel superior.”

The show began before social media became a ubiquitous force, largely giving viewers the chance to see inside the homes of the rich and famous for the first time. And since they are often the backdrop of some of the shows’ most iconic scenes, viewers feel a sort of intimacy they don’t get with a staged set like the “Friends” apartment, Thompson says.

After all, who can forget all the drama that went down at Kyle Richards‘ annual backyard white parties in Beverly Hills?

To find out who has the most outrageous homes, the Realtor.com® data team combed through nearly 200 real estate listings of the “Real Housewives” stars and compared their stats. We looked at everything from the square footage to the number of bathrooms. We focused on the seven biggest franchises: Beverly Hills, New York City, New Jersey, Orange County, Miami, Atlanta, and Potomac. (We did not include Dallas, which was canceled, and Salt Lake City, which is too new.)

So who owns the ultimate “Real Housewives” home bragging rights? Grab your glass of pinot grigio and read on!

The most expensive ‘Real Housewives’ franchises

The 90210 ZIP code has long been one of the most expensive in the country, thanks to its massive mansions and the many celebrities that call it home. So it’s no surprise that the women of Beverly Hills boast the most expensive manors. Like everyone else who lives here, they’re drawn to the lush lawns and expansive grounds that offer significant privacy, while still being close to Los Angeles.

All told, the median list price for former and current cast members' homes was about $6.9 million, significantly higher than the next most expensive franchise, Miami (where the median list price was $5 million). Besides the housewives, notable residents here include superstar singers Taylor Swift and Adele.

The cast member with the most expensive home

While all of the homes of the Beverly Hills' cast members are, objectively speaking, expensive, the priciest of them all belonged to one of the newest cast members: Diana Jenkins. Jenkins, a philanthropist and businesswoman, sold her Malibu mansion last year for $87 million, according to deed records.

Located in the appropriately named Paradise Cove neighborhood, the 3-acre spread includes the main house, three-story guesthouse, pool, and 256 feet of beach frontage. The home was built by the late country music star Kenny Rogers, so of course, there’s a recording studio and plenty of room for entertaining.

Reality TV enthusiasts might also recognize the home as the filming location for the final season of "Keeping Up with the Kardashians." (Kim Kardashian is just one of Jenkins' many celebrity friends.)

Originally listed for $125 million—largely for its prime location along the Pacific Coast Highway—it even has a cable car system that goes from the cliff to a beach cabana (complete with a wet bar), which Rogers was reportedly fined $2 million for installing.

The cast member with the largest home

Carlton Gebbia was on the Beverly Hills show for just a short spell in the fourth season, but she sure made an impression. That's something she has in common with the 15,200-square-foot Gothic mansion she helped design with her then-husband, business executive David Gebbia, and his brother.

Carlton Gebbia, a Wiccan, famously embraced the macabre, and the home was filled with crosses, dragons, black chandeliers, and heavy drapes. It also included a burlesque room—a major storyline in Gebbia’s single season on the show. She toned down the look when listing the property for sale in 2018, but cathedral doorways and intricate stonework remained.

The five-bedroom, six-bath home is set on a 2-acre lot. It also has plenty of privacy since it backs up to Franklin Canyon Park. (The hiking spot is popular with rich housewives and celebrities alike.)

The cast member with the most bedrooms

Former “Real Housewives of Miami” star and beauty mogul Lea Black has bought and sold multiple properties over the years with her husband, attorney Roy Black. Their extensive portfolio includes homes in California and throughout Florida. But perhaps their most impressive was a home they never even lived in.

The Blacks had been using the nine-bedroom Star Island mansion as a rental property, but it’s now on the market for $28.9 million (cut from its original list price of $34 million). They bought the property for $7 million in 2011.

While the listing doesn't include any interior photos, the Blacks have renovated and updated the property throughout the years. The waterfront home features 190 feet of water frontage with a fully permitted dock, a pool, and a guest cottage.

The 10,000-square-foot mansion was built in 1981 and sits on a pie-shaped acre on the exclusive, man-made island in Miami. Famous neighbors include Gloria and Emilio Estefan and Sean Combs. Two years ago, the newly engaged Jennifer Lopez and Alex Rodriguez picked up a property there. It’s unclear who kept the home.

The cast member with the most viewed home

The cast members' homes get lots of clicks on Realtor.com once they hit the market, but the most viewed home belongs to “The Real Housewives of New Jersey” star and boutique owner Melissa Gorga and her entrepreneur husband, Joe.

Fans should be very familiar with the 9,100-square-foot Colonial in Montville, a tony suburb of New York City that has consistently made Money magazine's list of Best Places To Live.

The custom-built home, which long served as a backdrop in the reality TV show, was completed in 2009. Set on over 2 acres, the home features extensive millwork, a two-story great room, and a high-end kitchen. The massive finished basement includes a gym, wine cellar, recording studio, and screening room (perfect for binge-watching "The Real Housewives").

The Gorgas listed the home for $3.5 million in 2017. After three years, multiple price cuts, and the toning down of some of the "Scarface"-inspired gold and gilt touches, the house was finally sold in 2020 for $2.5 million.

The cast member with the most extensive real estate portfolio

Having multiple homes almost seems to be a requirement to join the cast of "The Real Housewives." They make perfect backdrops for all the invariably disastrous trip episodes. (See: New York cast member Dorinda Medley's Berkshire home, Blue Stone Manor.) But it’s “Real Housewives of New York City” alum and serial flipper Bethenny Frankel who has the most expansive real estate portfolio.

That shouldn't be too surprising for fans; her design chops and real estate savvy have been featured extensively on the show. Frankel even had her own design spinoff with “Million Dollar Listing” agent Fredrik Eklund, where the pair teamed up on a Manhattan condo project.

The businesswoman, Skinnygirl founder, and philanthropist was one of the original cast members when the show premiered in 2008. At the time, she lived in a comparatively modest apartment on the Upper East Side but has since graduated to some pretty epic abodes.

Last month, Frankel sold her SoHo loft, which she renovated from top to bottom, for $7 million. She had purchased the space in 2017 for $4.2 million. However, her most “controversial” home was an investment property she bought in Bridgehampton, NY, during Season 10.

When telling the ladies the location of her newly purchased 1910 mansion, a former bed-and-breakfast, Frankel’s frenemy from New York Ramona Singer immediately chided her for buying a home “on the highway.” It seems Singer might have been correct. After renovating the property and renting it out for $150,000 a month, Frankel eventually sold it in 2020 for $2.28 million, just above the $2 million she originally paid.

The cast member with the weirdest listing photos

It doesn’t matter how luxurious the home is, if the listing photos don’t stand out, potential buyers won’t be interested. The "Real Housewives" homes are no exception to this rule, and many cast members use professionals to put their homes in the best light and get top dollar.

One sure way to set the listing apart is posing in the pictures, which former New York City cast member Kelly Bensimon did when she listed her NoLita duplex last year. The two-bedroom apartment is located in a landmark building that served as NYPD headquarters from 1909 to 1973. According to the listing, it features 16-foot ceilings, oversized windows, Venetian plaster, and a "modern attitude.”

Bensimon, a former model turned real estate agent, has made a name for herself in New York’s luxury real estate market since leaving the show in 2012. The Douglas Elliman broker reportedly closed $100 million in sales in 2021, according to the New York Post.

The photos appear to have worked: A sale for the $2.9 million unit is pending. 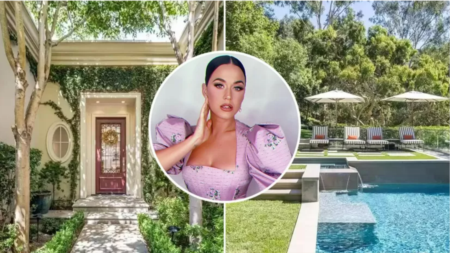 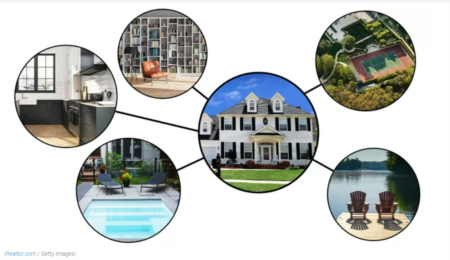 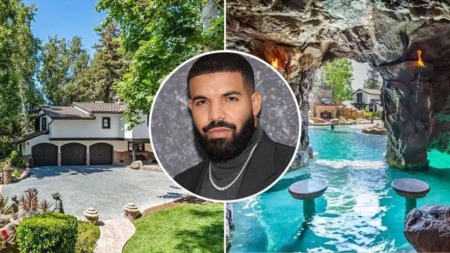 Can Drake Get $22.2M for His YOLO Estate and Hidden Hills Compound? 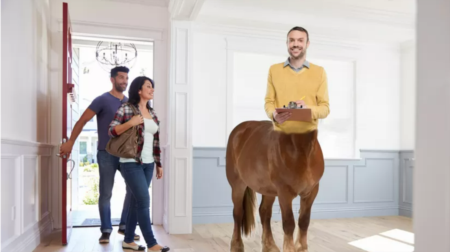 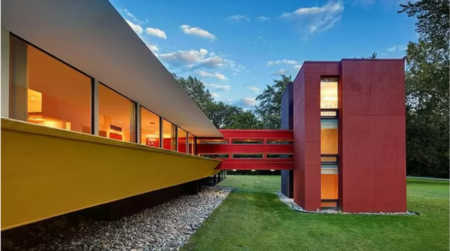